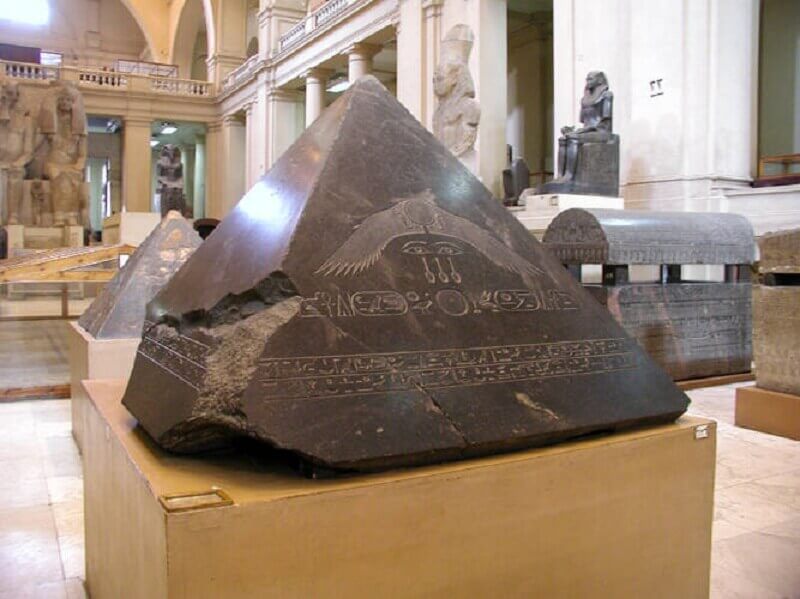 In the religious ideology of the ancient Egyptians the Benben stone played a huge role – it was a stone with conical shape and, according to the scientists of extraterrestrial origin.

The Benben stone was discovered in the Temple of the Phoenix. It is a symbol of this bird, which had the ability to revive itself, to be reborn and represents cycles of the seasons.

Usually in ancient Egyptian art the Phoenix was depicted as a gray heron. There was a belief that if the phoenix appeared in Heliopolis, a new cycle, a new era would begin. The cult of the Benben stone occurred after the first appearance of the Phoenix. Perhaps the stone was seen by Egyptians as the „seed“ of the cosmic bird since „ben“ means fertilization.

Modern Egyptologists believe that the stone had a conical shape. In the earliest images of the Benben stone together with the phoenix it can be seen that the stone did not have a pyramid-like shape – the edges are rounded and it looks more like a cone. Subsequently, the cone is replaced by a pyramidon.

According to the legend there was a sacred hill in Heliopolis from which the sun rose for the first time. It was there that the Egyptians erected a sacred pillar.

These are the times preceding the Age of the Pyramids. In the beginning of that age the column was replaced by a more sacred relic – the conically shaped Benben stone. It was the central subject in the ancient Egyptian cult, and it led to the construction of the pyramids.

What was located at the very top of the pyramid of Djoser remains a mystery. Scientists suggest that it was a copy of the Benben stone. This corresponds to the symbolism of the age of the pyramids.

Egyptologists say with confidence that a pyramid-shaped stone was located at the tops of the true, proper pyramids – a capstone, which was called Benben. Several such capstones can be seen in the Museum of Cairo. They serve in favor of the theory that the pyramids were not used only for funerals…

Iraq: Liberation of Mosul, in the heart of ancient Assyria